Posted by Michael Caldwell on
November 9, 2017
|
No comments

When my dad was still alive, I often spent Remembrance Day at the cenotaph in Brockville with him. I didn’t make it every year but I know that when I wasn’t there, at least one of my siblings would have been with him.

Our family, like so many others, has a long history of serving our country. I never knew my Caldwell grandfather, he died when I was 2 years old, but his service during WWI got him what is called a Mentioned in Dispatch. I have the signed document with his medals framed and hanging in our living room. Signed by Field Marshal Sir Douglas Haig and the Secretary of State for War, Winston Churchill.

I really can’t imagine what my dad, granddad and others went through. Periodically Dad would tell me stories about the war. Some of the stories were pretty funny and others, you could tell, were extremely unsettling for him.

Mom and Dad were dating before the war started. They didn’t get married as Dad didn’t want to “make her a widow.” So after Dad enlisted and was sent overseas, Mom signed up to join the war effort as well. To her great dismay she was rejected when she was diagnosed with TB and sent off to the “san” with recovery in doubt. So Dad was at war, Mom was in the sanitarium, neither with a high likelihood of surviving. But they did survive, or else I wouldn’t be here to write this. Mom was also told she should never have children as it might kill her, but being Catholic she didn’t listen and ended up with six.

One story I remember Dad telling took place one weekend when he was on leave. Apparently his regiment  were staying in what we might call a B&B. They were given strict instructions to be back by curfew or the doors would be locked and not opened until morning. Yup, you guessed it. They arrived after curfew, the doors were locked and they couldn’t get in. But there were a couple of British soldiers who’d missed the deadline too and when Dad started banging on the door they told him that it was no good “Canada”, the owners were not opening the doors, they had already tried.

Dad and his group had all been out drinking and Dad said he could get them all in. An argument turned into a bet. So Dad kept at it until they all got in. But before they went in Dad wanted to collect on his bet. “No way, Canada,” he was told. Finally Dad had had enough and he challenged the “Brit” to go out back outside and settle it.

It turns out the guy was bigger than Dad thought. Dad took one swing and the next thing he remembered was breakfast the next morning. He could only eat bread soaked in milk. “You shouldn’t have done that, Canada, I used to spar with Tommy Farr,” his opponent told him. And if you don’t know who Tommy Farr was, Google it. Dad found out real quick.

When Dad told his stories he would be laughing so hard he was crying. Other stories made him sob and weep. He could hardly contain himself. There was a lot of pain.

Some men and women don’t make it back. Many who do have suffered severe damage. Most have gone so we don’t have to. So this Remembrance Day take a moment to remember these people. You don’t need to believe in war. Many of them don’t. 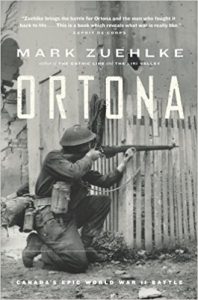 It’s been as long time since I read this book. Dad talked often of Ortona and how bad it was. This book does a good job of telling you just that. This definitely highlights how Canadians were at the front of some very intense and difficult interactions. Living so close to our American neighbours we often hear about their great accomplishments, and this story puts our war effort into perspective.

Find it on Amazon or at your local bookshop.

Preparing for Retirement? Get the first question right.

Thinking about retirement on a warmer planet

Michael Caldwell has been helping people sort through their money issues since the early 1970s. He has a way of talking numbers that just makes sense. Combined with wry humour and a curious mind, Michael writes about current topics of interest to the clients that he works with in his practice at Caldwell Wealth & Estate Advisory.