Lose Yourself to Find Yourself

It is easy to get lost in today’s busy, electronic, always-on world.

Information is constantly flowing at you, or past you. The need to constantly stay connected and be on top of the news, or work email, can be overwhelming. It is easy to become a slave to your inbox, or your calendar.

That’s how you might get lost in your work or the busyness of life, but it’s not how you lose yourself.

What do I mean by losing yourself?

For some, it might be going for a hike or taking a day to go to the beach – the tranquility of nature or a private retreat. Taking a day off from the usual responsibilities of life. Forgetting the momentary distractions and just being in the moment.

I recently rediscovered something that defines what losing yourself looks like to me and, although it’s a little more physically demanding than a day on the beach, in my mind it is equally peaceful.

One day, a friend and I found ourselves reminiscing about the good old days. This friend and I had shared a hobby in common that dated back about 15 years. It was one of those hobbies that tends to get swept to the side as we age and mature; as you find your career and family taking priority, that once important thing slowly fades into the background of life.

We decided it was time to recapture our former glory…even if it resulted in a few visits to KGH.

What I Found In The Shed

Shortly after our conversation, I made my way to the cottage to a storage shed that seemed frozen in time. I broke the lock off, having long ago lost the key. I swung the door open and pulled that old brittle canvas tarp off her. There it stood, exactly as I had left it approximately 14 years ago. 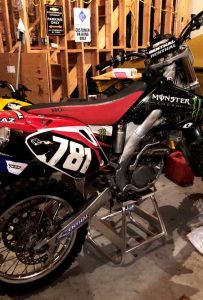 I gently woke it from its deep slumber. The handle bars seemed almost foreign to me. I remember thinking to myself, “I have to remember how to put it in neutral?” I maneuvered it outside to have a better look. Just as I did so, I heard a gentle whisper which said, “Fire me up.”

I put some gas in the tank and fumbled my way around, trying to remember how to start it…and after some significant tinkering and a few different levels of frustration (that’s code for a few choice words), that bike was finally up and running.

When it fired up, the sound unlocked memories that were long forgotten and washed over me like a tsunami. One thing was certain: I was smiling from ear-to-ear and I wanted to ride.

I called my buddy and we loaded the bikes up to go hit the trails. We found a trail near Odessa and the four hours on that beautiful October afternoon just flew by. 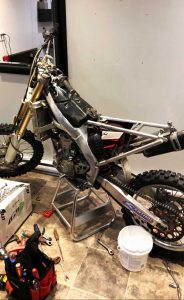 Before we could plan our next outing, old man winter knocked at the door and our riding season was over as quickly as it began.

We decided to make the most of the forced end to our fun by spending the winter fixing up our bikes to get them ready for the spring. Of course, with busy lives coming back to the forefront, the work once again got shifted to the back burner. Finally, in early April, we completed the visual pieces of the project and hit the trails.

What I Found on the Trail

Freedom and exhilaration poured over me once again. That passion was re-ignited. I cannot wait for the next ride so I can get out there and lose myself once again – man and machine as one.

I was compelled to look up the psychology behind what I was experiencing. My wife and I joked about it potentially being a ‘mid-life crisis’, however I thought there might be a deeper message in all of this.

I reflected upon artists who lose themselves in what they create, athletes who ‘get in the zone’ and crush records, or how any one of us can simply get lost in a good book. I also reflected on how kids can be out playing with friends and lose track of time altogether.

According to psychologist Mihály Csíkszentmihályi, this phenomenon is called a “State of flow”, a mental state characterized by energized focus, full involvement, and (most importantly) enjoyment.

What I Found About Me 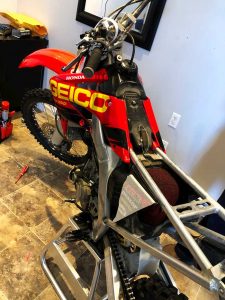 Reconnecting with this forgotten passion helped me find my ‘state of flow’ again. Sure, the bike is 15 years old and it doesn’t have a lot of financial value to anyone other than me – even with the refurbish. I could buy another – maybe a newer one with more bells and whistles. But it isn’t really about the bike, ultimately. It’s about the feeling I get when out there, ripping it up on the trails and losing all track of time.

From a dollar value standpoint, putting money into this bike doesn’t make sense. From a wellness perspective, as one major financial services company likes to say, there are some things money can’t buy. You could offer me five times the bike’s value and I wouldn’t bat an eyelid before politely declining.

The moral of this story is that the most important thing you can invest in is yourself and the things that matter to you. It’s the only investment in your life that pays constant dividends. Get out there and pursue something meaningful to you – anything – and rediscover what it is like to lose yourself. In the process, you’ll find your own “state of flow”. You’ll feel renewed and energized.

Of Ants and Grasshoppers

Jason is a passionate person and smart about strategic money management. His background includes working with one of Canada's big banks and he has helped many people articulate their financial goals and then take steps towards achieving them.

on Lose Yourself to Find Yourself.