The start of the year is always a good time to reflect on the previous 12 months.  We engage in this process as a firm, taking a week at the beginning of January to review our plans and progress for the past year, and to map out and discuss our goals for the new year.  This year, looking back is especially important as we embark on a new decade.  The last ten years included the longest bull market in history, but it also included a lot of uncertainty:

If we focus on the past year, it’s amazing what a stark contrast there was between the fourth quarters of 2018 and 2019.  Last year, the fourth quarter ushered in a sharp market decline that left most portfolios with a loss for the year.  In 2019, the fourth quarter closed with a strong rally.  The Canadian dollar had a great year as did pretty much every index.  Unless you were invested in cash or waiting on the sidelines (as globally, plenty of investors exited the market in Q4 2018), you had a good year in 2019!

Investing has always involved an ever-present environment of uncertainty.  As we exit the decade and look forward to the next one, the following uncertainties look likely to dominate our attention: slowing economic growth and the impact of low interest rates.  Are we headed into a recession?  The key indicators do not point to a recession happening anytime soon (See below:  green indicates a firm no; orange is a soft no and red means yes). All we know is that we are closer than we were yesterday!

As always, it’s prudent to not take on more risk than needed to reach your financial goals.  Rate of return is less important than reaching the financial targets dictated by your future goals. 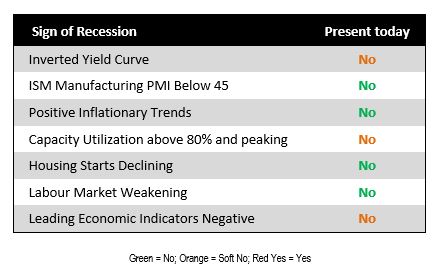 Most people are comfortable with what they know.  The same holds true with investing.  When we review portfolios of prospective clients, we often see a “home-country bias” with a large portion of assets invested in Canada.  This is very much an example of placing all your eggs in one basket.  Canadian stocks, for instance, only represent 3% of the world stock market.  Also, the S&P/TSX Composite Index is made up primarily of bank and resource stocks, which further elevates the risk to your portfolio.  Lastly, even the Canada Pension Plan Investment Board diversifies globally, allocating only 15% of their equities to Canada (CPP Investment Board 2019 Annual Report).  At Caldwell Wealth & Estate Advisory, we advocate a global approach to investing to reflect the broad globalization of the world economy.  Our portfolios are set up in a way to diversify away from “home-country bias” but also look to mitigate global risks (like currency and liquidity risk).

Read Fidelity Investment’s article Looking Beyond the Coronavirus Scare to see how virus outbreaks have historically affected the market.

Dan Lambert is a Financial Planner with Caldwell Wealth & Estate Advisory. Along with helping people prepare for their financial futures through solid financial planning, Dan curates and manages the investment options for the firm.