Investment Focus | Issue 10 | In Search of the Market Low

Investment Update – In Search of the Market Low

Good news kept rolling in through early April. First quarter earnings were not as bad as expected for a lot of large U.S. companies, and unemployment numbers were also lower than expected.  Then there was the announcement that the US might begin a slowed approach of reopening and the prospect of a promising antiviral medication from Gilead Sciences.  All this news (or lack of bad news) led to two weeks in a row of gains in the stock market (with the S&P up 27% from the bottom).

Last week was a different story, however.  On Monday, there was an astonishing plummet in oil prices (with one corner of the U.S. oil market even dropping below zero) and the market has pinballed back and forth as the mood swung from fear to hope and back again. There was also a report about Gilead’s drug that stated that it did not improve COVID-19 patients’ condition, which did not help matters. 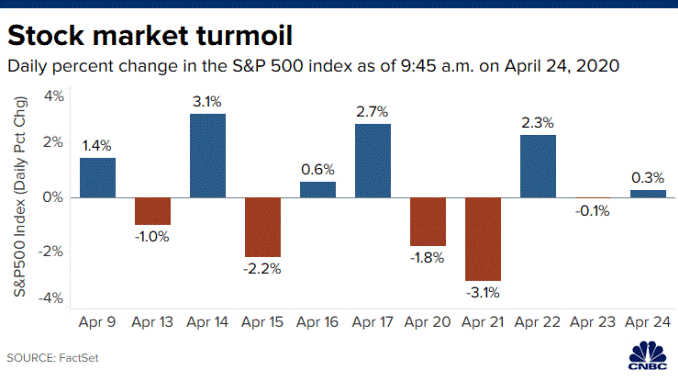 Although it was a volatile week, ending three weeks of gains, we ended on a relatively minor loss (as of Friday April 24th). The question everyone wants to know the answer to is whether there will be another pullback or have we experienced the worst. 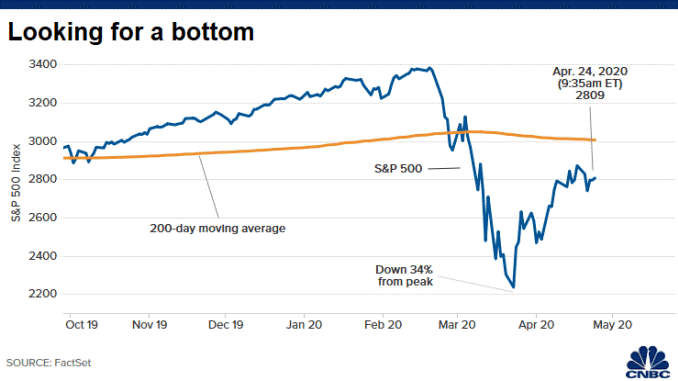 Some very influential people are betting on the bottom being behind us.  Larry Fink, co-founder of the world’s biggest money management firm, said last Thursday that the stock market’s low last month may have been the bottom of the panic stemming from the coronavirus pandemic.

“If the disease curve in the developed world continues to decline [and] at the same time we see the curve from governmental support for monetary policy and fiscal policy worldwide increases, we could have seen the bottom,” the BlackRock chairman and CEO told CNBC.

Goldman Sachs Group agreed as they released a report stating that U.S. stocks are unlikely to make fresh lows thanks to the “do whatever it takes” approach of federal policy makers. They believe investors will be focused on the outlook for 2021, not short-term earnings.

However, although there has been a V-shaped recovery in the stock market (so far), this has not been the case for the economy. Businesses can get by for a few months on government help, but if a shutdown drags on longer than that, they could be permanently damaged. Global lockdowns are starting to ease and there is talk in the US and Canada of beginning to loosen restrictions. Many are concerned with this potentially leading to a second wave of infection. Are these measures too early? Only time will tell. History and many analysts would warn us to expect a W-shaped recovery, with another test of the lows, even though it may not reach depths of the March 22nd valuation. 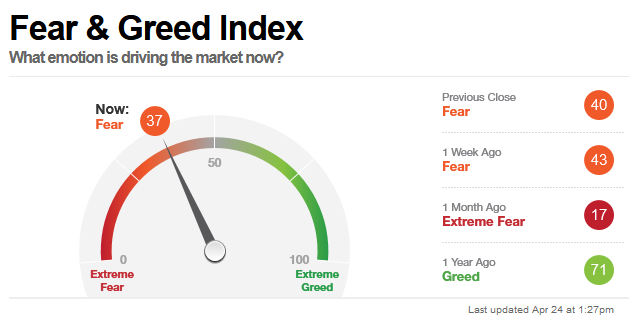 In the last newsletter, the Fear & Greed Index was at 42. It’s since declined slightly to  37, so not a huge change. Again, we don’t recommend making decisions based on this index, but it serves to give us a reference for the volatility in the markets. When the index is at either extreme (Extreme Fear or Extreme Greed), we need to be careful we don’t make decisions based on those emotions.

Our office remains fully operational (although from our homes) despite the crisis we are facing. If you have any concerns please reach out to us.  We can set up a time for a videoconference or phone call.

Dan Lambert is a Financial Planner with Caldwell Wealth & Estate Advisory. Along with helping people prepare for their financial futures through solid financial planning, Dan curates and manages the investment options for the firm.