Caldwell in the Community

We believe in the importance of giving back to our community. It is our practice to support a cause with passion and invite others to join in.

Hearts for Change is one such cause. ‘Hosanna’ is an orphanage in rural Kenya that takes in children who are either orphaned or whose parents are no longer able to care for them. They are provided with food, clothing and the opportunity to attend school.

In 2008, a young man named Dion Brash became a volunteer there and was moved by what he encountered. Deciding that he could help make a difference for these children, Dion came back to Canada and started Hearts for Change, a grassroots charity that helps make life better for the children at Hosanna.

Find out more about Hearts for Change »

The staff at Caldwell Wealth & Estate Advisory are proud to support the arts in the Kingston community through the The Grand Theatre. It is our goal to be a part of bringing the best musical and theatrical artists into our community.

Performance Sponsor at the 1000 Islands Playhouse

We feel fortunate to live in an area where the local arts scene is rich and varied. Each year since 2014, Caldwell Advisory has been a performance sponsor at the 1000 Islands Playhouse.

Relay for Life – ‘Caldwell In For the Cure’

Cancer has touched all of us and we want to help fund finding a cure. 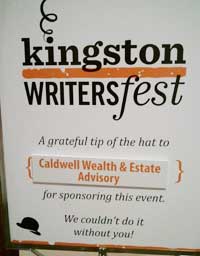 We were pleased to be an event sponsor at the 2013 Kingston WriterFest.

Back at Kingston WritersFest in 2014, we were an Event Sponsor (Author! Author!). We  sponsored author Eleanor Catton, winner of the 2013 Man Booker Prize.

Each December, the staff at Caldwell Advisory support the Hands for Hope program through Impact Church. This program helps to provide enough food to families for the two weeks that their children are home from school during the holidays and to give them a little extra to make Christmas special.